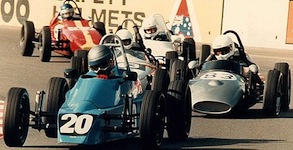 The class originated in the U.S. in 1960 at the request of a Volkswagen dealer. Vee racing began in 1963 and was recognised as a class of racing by the Sports Car Club of America. Within a year it was rated fourth in numbers in the 17 racing classes, a year later it was a close second and by 1966 the class was way out in front.

When Formula Vee was established it was designed as a learning class of motor racing. As the sport grew, the formula quickly established itself as a popular form of racing world wide. Take a look at Formula Vee at the 33rd Australian Grand Prix held in 1968.

Formula Vee was established in Australia in 1965. Membership and car clubs have grown rapidly as it is a level of motor racing most enthusiasts can afford. It is the best value-for-money race car package in Australia.

Formula Vee racing provides the thrill of fiercely competitive motor racing at a budget cost. Permitted modifications are minimal so that greater emphasis is on driver skill rather than budget. As a result, the class is the first proving ground in motor racing and has always been a stepping stone to higher levels of motorsport.

Vintage Vee-Dub Supplies have stocked the widest range of West Coast Metric window and body seals in Australia for over 20 years. We also stock a complete range of engine, brake, suspension and body parts, both standard and high performance. We stock Gene Berg, C.B. Performance, Scat, TMI, Empi USA, Flat 4 and Por-15 paints in our shop